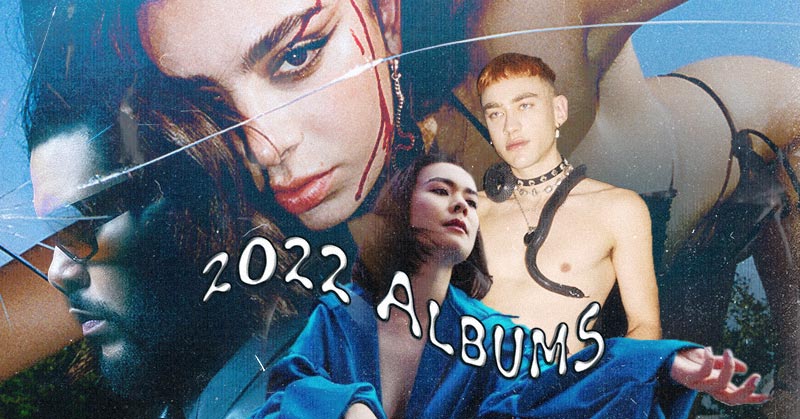 In the middle of confusing, painful and often dull times, nothing spells survival like a string of emotional support video games, stacks of page-turning titles or a hobby to fall back on. Now, as we revert to virtual dates and remain indoors, keeping ourselves entertained might come as second nature to many. After all, we’re approaching year three of the pandemic, so we’ve found better ways to stay occupied. For most—if not all—of us, music proves to be one of the brightest beacons of light in a present and future that’s nothing short of turbulent. Enter the much needed: new music in 2022.

Now, we can’t predict how the year will turn out. But at least in the thick of uncertainty, there are other things we can be sure of—like a whole new wave of albums to provide our lives’ soundtracks.

Up ahead, we list down what we’re anticipating for new music in 2022, and albums that already make the year a smidge bit better.

new music in 2022 from Dawn FM by The Weeknd

Following the massive commercial success of After Hours (Grammy or no Grammy, we all know that album went hard), The Weeknd will be releasing his fifth studio album, Dawn FM. In the tracklist video on Instagram, The Weekend describes the album as “A new sonic universe from the mind of The Weeknd.” I don’t know about you, but that’s enough to get me hyped.

Night Call by Years and Years

For 2022, Years and Years will be releasing his third studio album, Night Call. The first single, Sweet Talker with Galantis, offers an upbeat and energetic dance track. Sweet Talker sets the tone for the album as Night Call will explore the thrum of the nightlife and the thrill of going out. In a press release, he shares: “I was writing from a fantastical space, stuck in the same four walls. I wanted to have as much pleasure as possible in the music.”

Mitski rocked 2021 by releasing three lead tracks off Laurel Hell: Working for the Knife, The Only Heartbreaker and Heart Lightning. Due to her unique lyricism and sound from Be The Cowboy, everyone can’t wait for her follow-up, and it’s now coming soon. According to Variety, Mitski says that she wrote Laurel Hell because “I don’t want to put on a front where I’m a role model, but I’m also not a bad person. I needed to create this space mostly for myself where I sat in that gray area.”

As 2021 ushered in the re-introduction of Avril Lavigne to the audiences she first touched as teens, the release of her new music in 2022 will pave the way for her grand return. Bite Me seems to be the first taste of her new Love Sux era that revives her sound from Let Go, one we missed from her previous albums. So prepare to bring out your smoky eyeliner, plaid and pleated skirts and neckties, because Avril’s new reign is just getting started.

All we need now is to wait. In the meantime, listen to her new song, Love It When You Hate Me featuring blackbear.

After a few mixtapes and an album with heavy hyperpop influences, pop chameleon Charli XCX will come out with her fifth album, Crash. Basing it off on the sound of Good Ones, New Shapes featuring Caroline Polachek and Christine the Queens, the experimental singer-songwriter is going full mainstream. I’m not complaining, though, because I know it sounds good.

P.S. If you need more convincing, Rina Sawayama has a feature in one track. You’re welcome.

One of the most highly-anticipated albums for 2022 has to be Motomami by Spanish singer-songwriter Rosalía. She rose to international fame and earned her accolades from the Latin Grammys and Grammys because of her unique take on flamenco pop. All eyes and ears are on Motomami as it’s said to be her most experimental body of work to date. Just listen to La Fama featuring The Weeknd—that’s enough motivation to anticipate new music in 2022.

Boy of the Year by Warren Hue

The crowd during Warren Hue’s set at Head In The Clouds 2021 had the first taste of his unreleased music, jumping around to tracks that may land on Boy of the Year. In his exclusive interview with Wonder, the rapper and songwriter shares that he’s been busy creating his first album under 88rising. Everyone can expect more tracks and an even more unique cocktail of hiphop when it drops.

Since releasing SOMEBODY and teasing fans during livestreams about upcoming music, keshi finally set up pre-orders for his first-ever album, gabriel. This record veers away from his darker and quieter sound to explore another side to keshi. In a press conference back in 2021, the singer shares that this record stands out from the rest of his work. “Not everything has to be in such a moody, broody sort of atmosphere. I’m more than that genre, and I am trying to prove that with this next record,” he shares.

A Rihanna drought can’t hurt you if you’ve been waiting on Sky Ferreira since forever. After the smashing success of her 2013 album Night Time, My Time, the early 2010s Tumblr icon announced that she was working on her next album, Masochism. It’s been five years of waiting, and as the 2010s soft grunge era is nearing its resurgence, maybe it’s the ripe time for her to drop this album so we can formally add it to our list of new music in 2022.

P.S. She did confirm new music on the way, so here’s to hoping it finally comes true.

As BTS announced their break for the holidays, the statement mentioned that they’re also in the middle of making new music. So after the serotonin boosts of Butter and Permission To Dance, we’re all left to think: what genres will they experiment with this time around? Will we get quieter and reflective songs like BE or more lovelorn tunes ala-Love Yourself: Tear? Only time will tell.

Aside from this list of confirmed and unconfirmed albums we might get this year, I can’t help but keep my fingers crossed that Cardi B, Kendrick Lamar, Britney Spears and maybe even Beyoncé will release new music in 2022. Whatever happens though, I’ve got my hopes up.