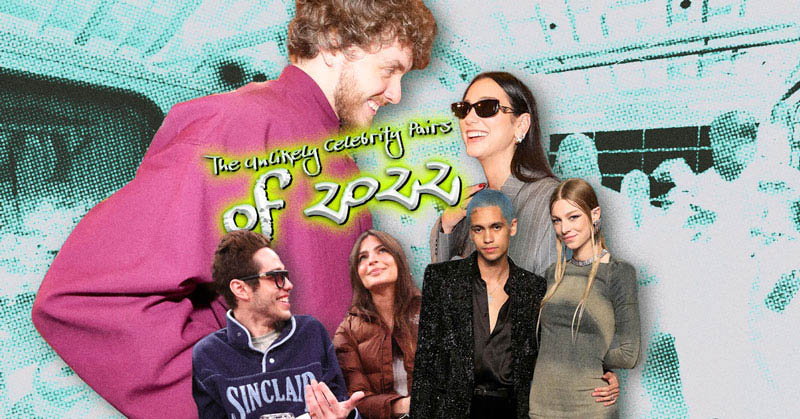 The Unlikely Celebrity Pairs of 2022

All loved up and romanced, here are a couple of celebrity pairs that took us by surprise

The ways we consume news about celebrity couples go from zero to 100. Sometimes these provide an escape from reality, a way to feel our feelings or just something to talk about. But for the most part, we can’t help but be happy for them in their quests to find love in such a lucrative industry. You know, finding someone who also knows the struggle of life in the spotlight. Those who also hate having their every move inspected with a magnifying glass and everyone telling them what to do. We see such good in couples like Justin and Hailey Bieber or Travis Barker and Kourtney Kardashian-Barker.

Speaking of finding the celebrity pair of the year, we list down a handful of unlikely combinations. Not inherently weird or bad, but a list of lovebirds we never saw coming. So whether you like them or not, it’s all up to you.

Many of us heard of Dominic Fike as he stepped into the Euphoriaverse as Elliot, Rue’s new friend, who comes between her and Jules. Now, Jules and Elliot have done questionable things, and even the general existence of this new character has many viewers polarized. So despite the shaky ending to Euphoria season two, at least the actors get an offscreen end, right? As #TomDaya remains strong IRL, it turns out that so do Dominic Fike and Hunter Schafer. Their socials have no traces of their S.O., which sends out a message: they hope to keep their relationship private. Apart from one-off spottings in public and red carpet appearances, that’s the most we’ll get from them. You know what? Respect!

Following Pete Davidson’s split from Kim Kardashian and Emily Ratajkowski’s divorce from Sebastian Bear-McClard, the comedian and the supermodel sparked a romance around November. The internet is seemingly shocked, as it should, that Pete Davidson has secured one of the biggest names in the industry. Again. This man’s list of exes and former dates is star-studded: with Ariana Grande, Kim K, Kaia Gerber, Bridgerton’s Phoebe Dynevor—you get the picture. But the two seem happy together, even playing around courtside at a New York Knicks game at Madison Square garden. We wish them the best of luck as they take this to the next level.

After Leonardo Di Caprio broke up with Camila Marrone as soon as she turned 25, the internet took to social media to point out a recurring and questionable pattern. As his dating history suggests, he doesn’t publicly date women under 25. Even the golden Taylor Swift lyric doesn’t spare him: “I’ll get older, but your lovers stay my age.” So it surprised everyone that he got with top supermodel Gigi Hadid, aged 27 years old, a few months later. The sudden news made people skeptical about whether the actor was trying to clear his name or if he had a genuine interest in Hadid. Nonetheless, the two seem to enjoy each other’s company. They even made time for each other and dined out in New York, as seen above—maybe this could go somewhere?

Pop sensation and Grammy-winning singer Billie Eilish gets together with The Neighborhood’s Jesse Rutherford. The head-turning and controversial 10-year age gap have people sounding the alarms. Because, after all, they got together when she was 20 and he was 31. But, much to others’ dismay (or glee? We’re not so sure), the two are seemingly unbothered and absolutely smitten with each other. Whether it’s getting cozy in their pajama chic outfits on the red carpet or celebrating her 21st birthday bash, Billie Eilish and Jesse Rutherford are inseparable. Just take a look at her sixth Vanity Fair interview—she looks really, really happy.

RELATED: Retroactive Jealousy: How Can It Mess With Your Mental Health and Relationships?

this user defends phoebe dynevor and andrew garfield as a couple and considers herself their daughter pic.twitter.com/GMCTZUYPqs

Well, reportedly. While we take this news with a grain of salt, we can’t help but marvel (pun intended) at the possibility of these two brilliant actors together. Marie Claire quotes a story from the British tabloid The Sun. Their source says that as GQ Man of the Year Awards was in full swing in London, and a couple of outlets mentioned that the iconic Spiderman actor and Bridgerton star hit it off really well. Supposedly the two continued meeting up and are “acting like a proper couple.” Only time will tell whether this develops or remains as chatter.

Jack Harlow spoke it into existence on “Dua Lipa” 😭😭 pic.twitter.com/CPao6cfWYq

Dua Lipa and Jack Harlow are the latest, unlikely couple to spring up before the end of the year. From penning lyrics to making it happen, news reports say that the First Class rapper got more than a feature. British media speculate that they’ve been talking and meeting up for a while, stepping out for lunch included. Hey, there’s a possibility that Dua already foreshadowed their rel on the day they met (and maybe hit it off): check out their specific slide inserted in her photo dump for Variety’s Hitmaker Lunch. We see you, Dua 👀

Unexpectedness and unlikeliness aside, we really hope these couples find happiness as we enter 2023. And for you, dear reader, we hope you get yours, too.