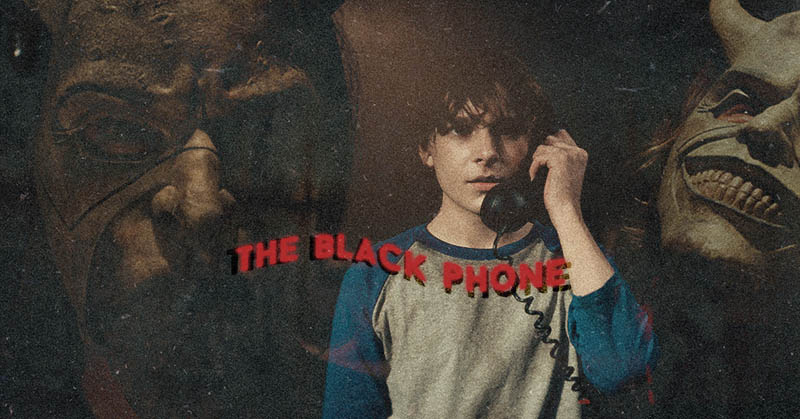 “The Black Phone” lives up to its hype

Let’s get this out of the way: horror and thriller movies absolutely terrify me. I have little to no guts to sit through horror, thriller and slasher films. So you can imagine my hesitation in accepting the advanced screening of The Black Phone, a film directed by Scott Derrickson. In case you didn’t know, he directed The Exorcism of Emily Rose, Sinister and the 2016 iteration of Doctor Strange. Blumhouse Productions, the company behind bloodcurdling horror classics, also produced this movie. And this film adapts a short story written by Joe Hill—son of horror legend Stephen King.

All-in-all, this spells like a cinematic recipe that is not for the weak. Nonetheless, I soldiered on and made my way to the screening, ready to be scared out of my seat. But as the movie progressed with effective surprises and a great twist, I grew to embrace the film in all its glory. With VHS effects and sepia-grading throughout, the film feels plucked out of true crime documentaries retracing the horror stories of old serial killers. The effects make it all the more ominous and scary, while the soundtrack used synths and warped sounds for scores, adding a youthful touch to the film.

As for the plot, The Black Phone follows Finney Blake (Mason Thames), a bullied 13-year-old teenager who lives with his gifted sister, Gwen (Madeleine McGraw), and alcoholic and abusive father, Terrence Blake (Jeremy Davies). Finney gets abducted by a notorious, sadistic serial killer nicknamed The Grabber (Ethan Hawke), who also kidnapped two of the boy’s peers. The Grabber keeps Finney captive in his soundproof basement, left with only with a toilet, a mattress and a disconnected phone mounted on the wall. But as Finney remains captive, The Grabber’s deceased victims communicate with him through the disconnected phone. The souls remain dead set on keeping the boy alive, teaching him how to outsmart the captor.

Ethan Hawke’s The Grabber may appear as chipper as he is violent, creating a tense atmosphere whenever he appears onscreen. Now that he finds himself in the place of the antagonist, the veteran actor plays his role up to the tee to the point that we barely recognize him. Though if you’re the type of viewer who wants to get into the inner workings of The Grabber, then you might be disappointed. The Black Phone’s length and speed don’t leave enough room for us to understand the antagonist. No dark history, no twisted motivations, just a plain old creep terrorizing children in the sleepy town of Denver, Colorado. But in all honesty, I like it that way. Sometimes antagonists—humans—are simply evil; no explanation needed.

We all know that most horror movies involve malevolent spirits. Possessed nuns, hexed dolls, witches and their descendants bearing the weight of a family curse—it always seems like the evil is in the supernatural. But in The Black Phone, evil comes from humans: violent adults, hostile school environments and a weird creep on the loose. In this film, the supernatural spirits come together to help out a tormented child. They find ways to fight back beyond their physical bodies. And this is what sets The Black Phone apart from regular horror films: the protagonist’s coming of age happens thanks to his allies who happen to be vengeful souls.

While the premise makes it sound more palatable than your regular horror film, The Black Phone comes with many surprises. Of course, it’s a thriller made to make you scream, swear, pray and yell in the cinema. It has (some) gore, ghouls and a really creepy villain. But it also focuses less on grotesque imagery and blood. Instead, the true horror lies in the suspense Hawke and the rest of the cast evoke, and not knowing what happens next will send chills down your spine.

The Black Phone may be a spine-tingling, toe-curling, hair-raising thriller flick on the surface. But as it peels back its own layers, The Black Phone also tells a compelling coming-of-age tale. Perhaps that’s what makes it a movie worth watching.

“The Black Phone” premieres on July 20 in Philippine cinemas. Catch sneak previews on July 11 and 12 in select cinemas. The movie is rated R-13 by the MTRCB. For more updates and information, follow Universal Pictures Philippines on Facebook, Instagram and Twitter.