Mimiyuuuh in Wonderland: Behind the Cover Beauty

Tips and tricks, from skin prep to heart-shaped lips

After ten months of shooting regular covers, Wonder’s hitting the end of the beginning. It’s a feat that feels unbelievable in both an “It’s been ten months?!” and an “It’s only been ten months?!” kind of way, one that I feel has re-taught me the fundamentals I’d forgotten about conceptualizing and producing these grand spectacles we call our cover shoots. There’s a surreal feeling to all of it––and now that I think about it, that surrealism trickled down to what eventually became our October cover feature.

Having Mimiyuuuh front our October issue was just one of those things that made sense right from the get-go. Our first feature with the internet sensation proved that people were eager to see more of her, and hey, there was nothing stopping us from being generous this time.

Fully basking in our theme, Let Your Freak Flag Fly, we dove head-first into a concept that would allow us to play around with makeup and Mimiyuuuh’s effervescent personality. Lo and behold: Mimiyuuuh in Wonderland.

Pinpointing the characters Mimi would transform into was a job we called done within minutes. Hinging primarily on the Tim Burton iteration of Alice in Wonderland, we looked to the characters with the most distinct, most memorable looks: Alice, the Mad Hatter, the twins and the Red Queen. Ahead, we show you the meticulous planning that went into each look:

RELATED: First Impressions: An Honest Take on Blythe by Careline 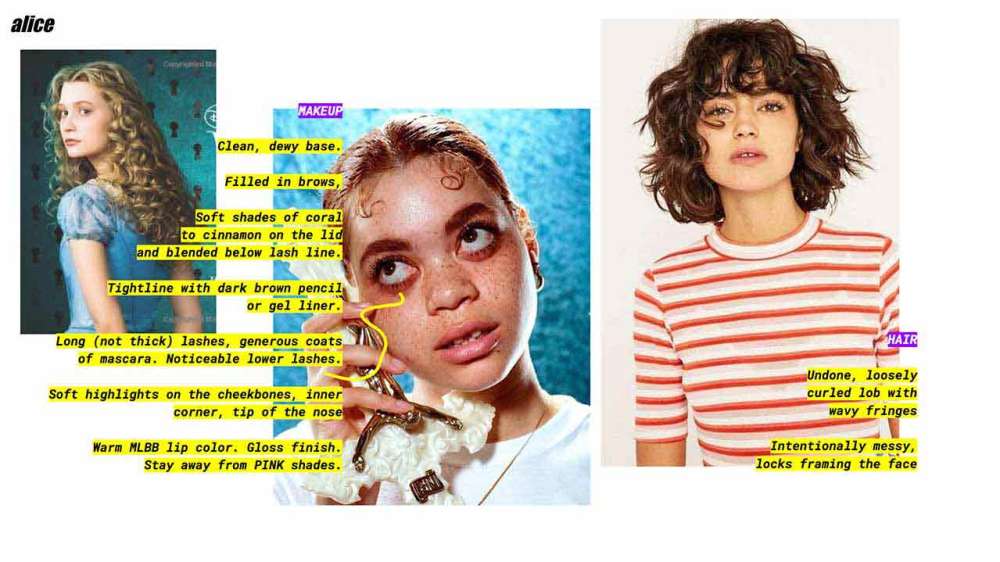 With only a few hours to shoot four transformations, it was clear that condensing looks would be of utmost importance. Building off the same bases and keeping hair changes to a minimum was the name of the game.

The makeup for Alice was the simplest out of the bunch. In the interest of time, the flawless, dewy skin and filled in brows from this look served as a bedrock for all the succeeding characters Mimi would become. When it comes to perfecting base makeup, remember: Preparation is key. No matter how good the foundation, there’s bound to be some flaking and caking if your bare skin isn’t ready to have product slathered and patted all over it. Before applying your foundation, let the skin drink up for a few minutes by slathering on a layer of lightweight moisturizer, spraying on a hydrating mist or putting on a sheet mask.

RELATED: The Best Drugstore Foundations for Morenas (for Every Skin Type) 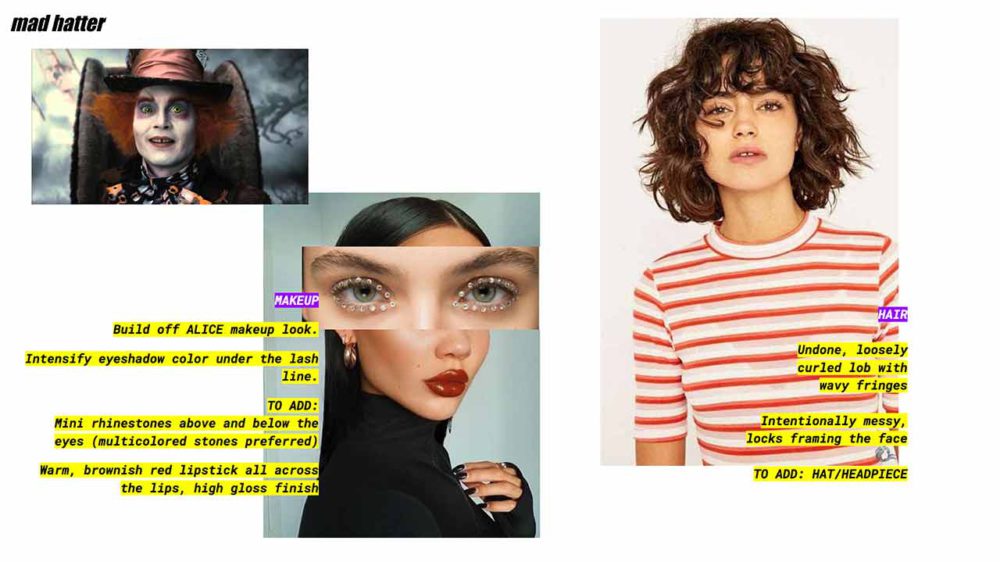 A swipe of a warmer lip color and an assortment of rhinestones around the eyes signaled the next layout. The brows, base and expertly tousled hair––a wearable compromise between Alice’s ladylike ringlets and the Mad Hatter’s zany, Einstein-ish hair––remained constant. To nail the undone, devil-may-care waves that Mimi sported, skip the conditioner and muss up the hair with the help of a little (or a lot, if your locks fall on the limp side of the spectrum) texturizing product. 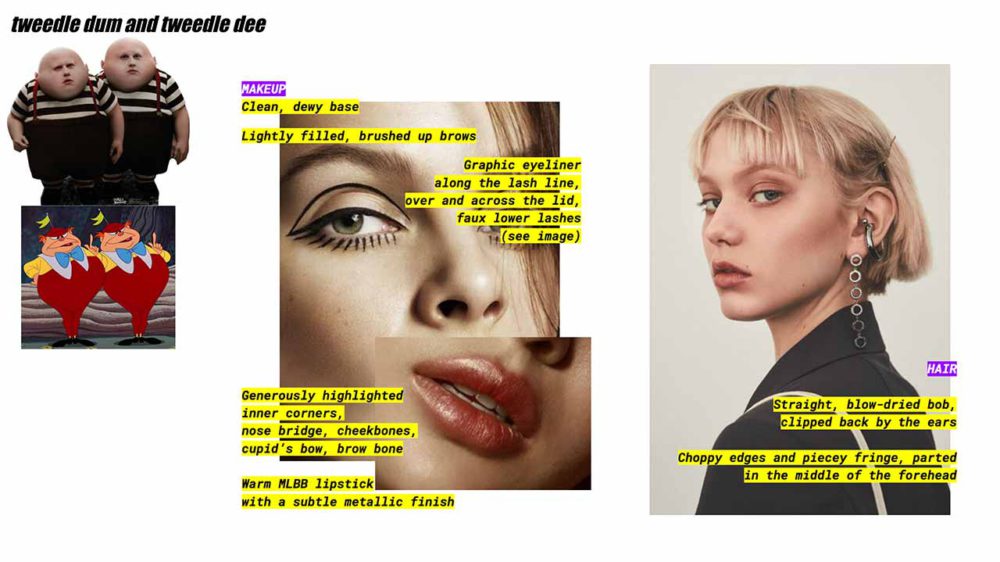 Is it just me or have Tweedle Dum and Tweedle Dee become permanently associated with striped shirts and suspenders since Tim Burton’s version of Alice in Wonderland? This visual element was the ground on which we built the beauty look for Mimi’s own take of the dynamic duo. Instead of stripes (although she wore those, too!), makeup artist Janell Capuchino framed her eyes with black graphic liner. This look is one that requires precision, so you’re going to want to practice drawing over and across the lid with a thin-tipped eyeliner. Don’t forget the exaggerated lower lashes! 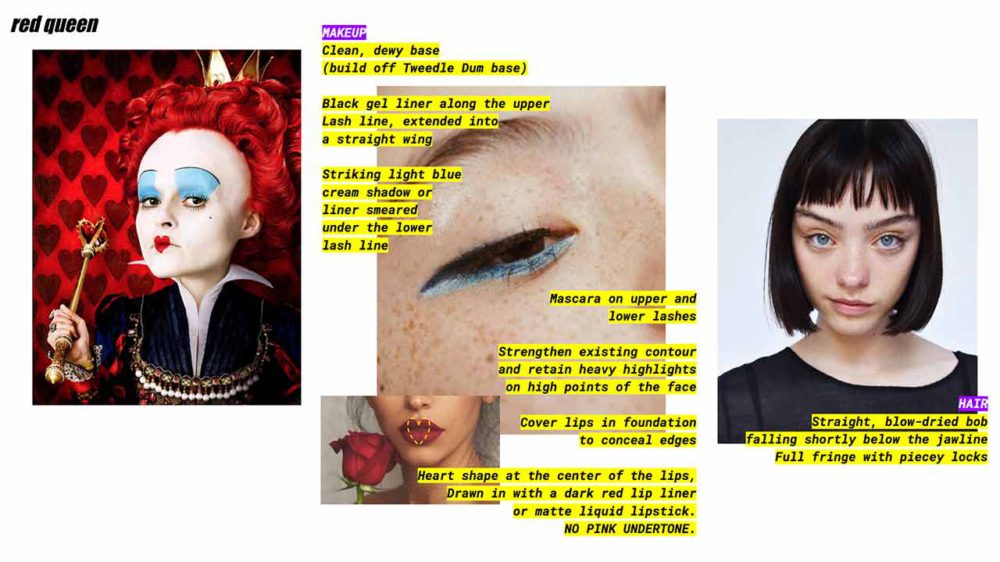 Perhaps the look that made the most waves out of the four, Mimiyuuuh’s take on the Red Queen was one of the more literal adaptations of Tim Burton’s characters. Instead of a full-on block of blue on the lids, we opted for a more current take on the Queen of Hearts’ eye makeup: a swipe of color under the lash line. As for the lips, there was just no writing off the iconic red heart. In order to get a mess-free, budge-proof look, apply a matte liquid lipstick from the cupid’s bow to the middle of the lower lip with a fine brush.

Have you read through our October cover story with Mimiyuuuh yet? If you haven’t, consider this your invitation to Wonderland.