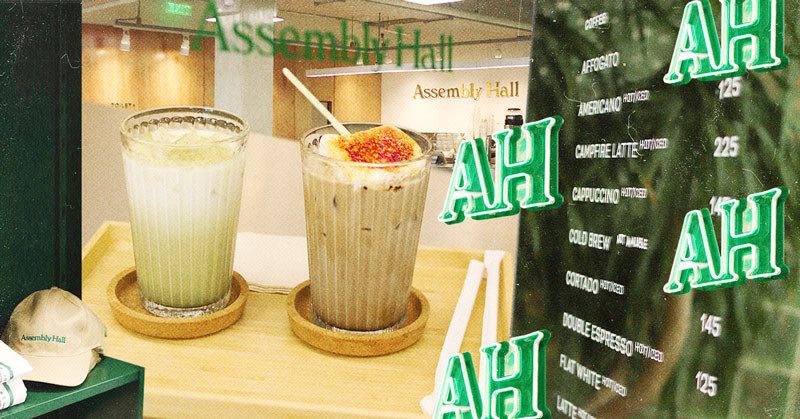 Assembly Hall is your new go-to coffee & cocktail space, whether for work or play

When you think about Poblacion, you envision the burgeoning, vivid nightlife scene, a place where restaurants and cocktail bars are aplenty. It’s only recently that its local coffee culture has been reimagined with one-of-a-kind, independent spaces that compete with commercial coffee chains scattered around the metro.

Assembly Hall is your newest community-based café located in the heart of Makati—its more gritty, less curated side, that is. Their doors are open whether you’re in the mood to coop up and work all day, or maybe just catch up with friends. And you’ve probably seen it on your Instagram and TikTok feeds: the mirror that launched a thousand selfies.

In an exclusive interview with Assembly Hall founder and all-around creative Harvey Alumisin, he narrates the birth of the creative space: “I woke up one day—I do things out of a whim, but I make sure that I’m able to execute it very well—and I didn’t want to work at the office; I wanted to go somewhere else. I was going around the city, at least in Makati, BGC, and [tried looking] for a place that was conducive to my liking. I’m sure there are a lot, but not with my aesthetic and the vibe that I’m looking for.”

Through his many travels—even becoming a New York local for six years—he’s discovered independent holes-in-the-wall, which he drew inspiration from to create what we now know as Assembly Hall on J.P. Rizal Avenue.

The space, which occupies HMA 773 Building’s entire second floor, is raw and induces nostalgia. At the helm of the project is Mara Manalo of Studio Mara. Harvey reveals their inspiration behind the brand’s aesthetic: the beauty of imperfection. He notes, “There’s something so beautiful about [rawness]. [When you look at] the concrete floor, it’s incomplete. At the end of the day, it’s actually paint that’s splattered on the floor—not intentionally—because we didn’t have time to clean it. But it works!”

He adds, “We’re not pretentious, we’re not trying to be anyone else but ourselves.”

Looking for a space to finish a work deadline and maybe even meet with the rest of the team? Assembly Hall’s got you covered! Did we mention there are a ton of plugs and free Wi-fi?

On combining a coffee shop and cocktail bar (👀), Harvey envisioned it as a transformative space. He jests, “It’s not naman a brand new idea, right? But we want this to be a transformative space in a way that you’re going to stay here from morning ‘til night. You wouldn’t have to go out of here to do all the things [you need to do]. You can work here as soon as we open and then do your after-hours.”

Given all the overwhelming support for such a young brand that’s just a month-old, Harvey believes they’ve succeeded despite initial issues. He reveals, “We had it against all odds. The three people I work with [and I] are not in the F&B industry…Second, we’re off-the-grid; we’re not in a mall, we’re not in the city center. You have to walk up a staircase to come here and there’s barely any parking. But I realized if you’re able to deliver something, and it has elements of what you’re trying to do—you tick all the boxes, and people will come.”

There’s no mistaking that the nostalgia-inducing Campfire Latte is the brand’s signature drink and an instant favorite amongst customers. We’re all about that toasted, gooey marshmallow goodness with a hint of chocolate! As Harvey describes it, “It’s really like [our] childhood in a drink.”

A cocktail space with no cocktails, you ask? Watch this space for the full reveal. 👀