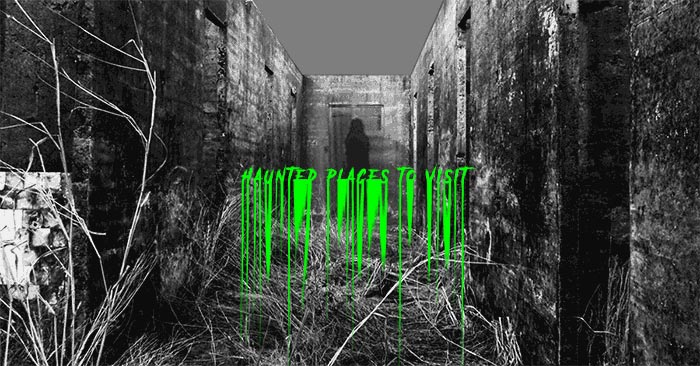 These haunted places in the Philippines might shake things up—literally

There’s something about Halloween that gives us a little more courage to face the scary, creepy, and daunting things in life. Maybe it’s a little thrill we allow ourselves just once a year, or maybe it’s the energy we get from everyone else preparing their homes, costumes, and faces. Who knows? Whatever the reason, we dare you to push it just a little more this year. After the Pennywise and Joker costumes are put back in your closet, go on a drive this long weekend for another kind of adventure. After all, what better way is there to embrace the Halloween spirit than visiting some of the haunted places in the Philippines? Sometimes we forget just how much tragic history our country has—and how much tragedy refuses to leave.

RELATED: Our Favorite TV and Movie Freaks to Channel This Halloween Underneath UP Los Baños’ Baker Hall is a tunnel that acted as a passageway for prisoners of war. Meanwhile, the building itself, occupied by the Japanese, was an internment camp for these Americans and allied POWs. Supposedly, the ghosts of garroted prisoners appear all the time the reason why it is known as one of the haunted places in the Philippines. You know this place; the name is enough to give you chills—but let us tell you the story anyway. A little narrative always adds to the rising fear, doesn’t it?

Named after the rows of balete trees that line it, Balete Drive is something straight out of a horror flick. For one thing, baletes are known to be the homes of paranormal beings. Second, the stories of people brave enough to drive along with it in the middle of the night are enough for the faint-hearted to take the long way to their destination.

More often than not, the stories are about a bloody and faceless white lady that is said to haunt the roads. You’re just driving down the road but then you look at your rearview mirror and she’s sitting in the backseat. Rumor has it that she was raped and killed on Balete Drive. So is she seeking vengeance? Seeking out her tormentors? Whatever her reason, motorists are well-advised not to pass once the sun sets or to have a car full of people or to never—never—look at the rearview mirror. Hospitals generally are considered as haunted places in the Philippines. It give us the creeps as is, but the Capitol Medical Center in Quezon City gives an entirely different chilling experience. All those in the know are careful not to use one particular elevator, where doctors say an orderly died. The orderly was apparently speaking to someone while getting on it and didn’t notice that there was no elevator cabin—and plunged to their death.

So what happens when someone does use it? Kevin Sandiego once went on the record to say that he and his family once used the elevator, intending to get off the second floor. But when they got it, the elevator stopped at the basement, where a man got off. The Sandiegos followed the man, thinking he knew the way out. When the man turned left, so did the family. And it would have been fine, except the turn led straight into a wall and the man they followed was nowhere to be found. The Clark Air Base was once a place of refuge and solace for American soldiers during the war—but it also bore witness to countless deaths and seemingly never-ending violence. This hospital was once featured in National Geographic’s I Wouldn’t Go There, where the ghost hunters called it one of the most haunted places in the world. Apparently, the souls that still reside the Clark Air Base Hospital aren’t the mellow kind; they throw objects at unwelcome visitors.

It’s funny how a thing that’s established to be a refuge often becomes a place of horror, isn’t it? As the setting of hundreds of tortures and killings, it’s no wonder why people say Fort Santiago remains to be the home of World War II civilians and soldiers. It is said that soldiers’ ghosts still patrol the area at night, mixed in with actual guards who have the unfortunate job of keeping the haunted place safe (from what?).

A little piece of advice: Don’t talk to anyone you see dressed in uniform. A boat ride away from Manila Bay is Corregidor, an important island in our country’s history. There were battles fought, blood that was shed, and countless lives were taken. And in case you aren’t aware, Corregidor’s Malinta Tunnel was built to be bomb-proof—and therefore became a safe haven for those on the island.

Nevertheless, the long and eerie tunnel eventually became a makeshift hospital. There, more than a thousand individuals were being treated. Currently open to local and international visitors, there are countless stories of unexplained shadows, out-of-nowhere noises, and sudden drops in temperature during tours. Right beside Mt. Cristobal is Mt. Banahaw, which is a famous destination for devotees during Holy Week. That’s important to note because Mt. Cristobal is known as the “Devil’s Mountain.” Daring hikers tend to experience some paranormal activities while on their climb—think losing their minds, getting lost despite following a trail, losing items, and green neon lights appearing on the ground. More than two decades ago, the Ozone Disco Club was the place to see and be seen—which is why hundreds of graduates decided to celebrate their freedom from school there. But on March 18, 1996, everyone’s favorite place caught fire and killed almost 200 students trapped inside. When the fire was finally resolved, authorities saw burned bodies littered along the corridor that lead to the establishment’s only exit. Guess fire exits weren’t a thing then.

The same space is now abandoned, of course, but residents around the area still claim hearing party music coming from the exact spot that the club used to stand. Not only that: They see silhouettes still dancing in the middle of the night. Anyone want to take their dancing shoes out for a spin?

The Chapel of the Most Blessed Sacrament, De La Salle University, Manila Old Manila may have gotten a facelift (debatable) since World War II. However, the dead seem to have no problem recognizing it. DLSU’s Chapel of the Most Blessed Sacrament is where many La Sallian brothers and civilians were massacred by Japanese soldiers. Some of those victims are said to still roam those pew rows with the school’s staff. Also, a lot of students are swapping their own eerie sighting stories. It may be abandoned now. This space that dates back more than a hundred years was first a seminar, a school, and then a hotel. During World War II, several nuns and priests were beheaded by the Japanese soldiers there.

Now visitors see headless ghosts walking around when they dare walk by themselves. Not to mention there have been claims of people hearing screams and cries of babies and children. Apparently, WWII wasn’t safe for the young either; they were massacred along a fountain not far from the decrepit hotel.

Is anyone out there feeling a little brave? It doesn’t take much to get to the places we listed above. However, it does take some real courage to go through with the trip.