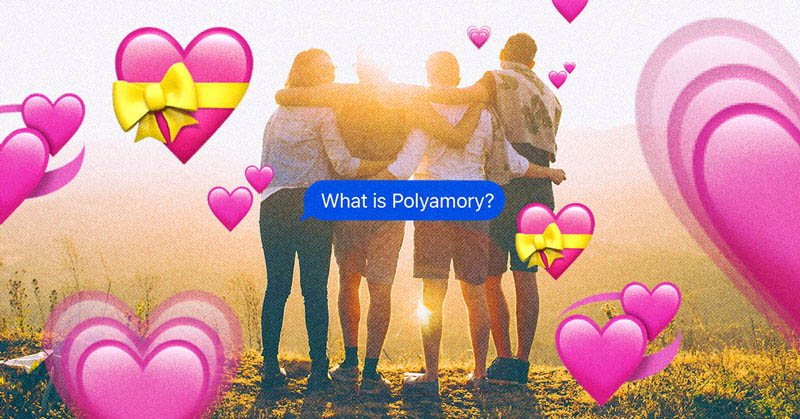 Tl;dr: a healthy polyamorous relationship is sustained by solid communication, honesty and consent

Disclaimer: To protect the privacy of the individuals, all names of the participants have been changed.

On a curious side of the Internet lies a Facebook group formed during the pandemic with around 700 Filipino polyamorous members. Amid a rich mix of lifestyles and belief systems in our predominantly conservative nation, more are becoming progressive and redefining the idea of love.

For two engaged couples—Kevin and Mika, Doug and Perse—healthy polyamory can actually exist. And in reality, it’s more similar to a monogamous relationship than we think. It’s constantly evolving, as each party continues to redefine themselves—and their personal emotional and physical boundaries—in relation to their partner.

Ahead, we get to know the young couples and the reality of being in—and sustaining–a healthy polyamorous relationship.

Wonder: How would you define polyamory? Is it something as simple as being in an “open relationship?”

Kevin: I’ll preface this by saying that there is a community of poly people in the Philippines. I guess, more broadly, “ethically non-monogamous (ENM) people,” which includes everything from polyamory to open relationships. Anything that doesn’t fit into the relationship model where it’s “one partner and one partner,” and that’s it.

Doug: It depends on the couple; it’s always a case-by-case basis.

W: You talk about ethically non-monogamous relationships. When does it become unethical?

Kevin: I think what would probably separate an ENM set-up from cheating—or just being a crappy person—is being open about what the setup is [to your partners] and setting boundaries. [It’s also] communicating like grown-ups and setting rules within the relationship that work for everyone, and following them.

Doug: I think the thing that needs to be super emphasized [in an ethically non-monogamous relationship] is consent.

W: What do you think are misconceptions that people, in general, have on polyamory?

Kevin: The low-hanging fruit one would be that [polyamory] is just an excuse to cheat. We can’t just keep it in our pants and be satisfied with just one person, unlike the “rest of the population.” In my experience, that’s not true.

Another one would be that polyamory is a free-for-all. Let’s say you’re in a polyamorous relationship; that means you yourself are interested in seeing other people romantically might not be true. There are mono-poly relationships [where] one person is monogamous, and they’re in a relationship with someone who is polyamorous. While the mono person feels completely fine and satisfied with just being partners with their partner, the polyamorous person might have “more love to give,” so they enter relationships with other people. The important thing is that it’s healthy and that it works [for all parties].

W: When did you have “the conversation” with your primary partner? Did it stem from some form of discontent? Was it simply to explore and have fun?

Mika: I remember our conversation very distinctly. It was the second time we met…I did ask, “Are you dating other people?” At the time, [Kevin and I] just started seeing each other. We did agree that [we’re] still exploring; nothing about [our dating relationship] is necessarily heading in a serious direction yet. So go ahead, explore.

When we started to get more interested [in] each other and eventually [started] talking about exclusivity, it was much less a conversation about “do you want to be exclusive” but “do you want to be official?” If we were both to become official, I think we both agreed on the concept that, sometimes, you can find enrichment elsewhere; and it doesn’t necessarily mean that your partner isn’t enough.

Kevin: I think it’s also worth noting that at this point, none of us had ever been in poly relationships before. We started out open, non-exclusive physically…Early on, we were both in a place of…physical non-exclusivity, but we kept the emotional side of it to ourselves. Interestingly, the conversation evolved over time.

I was very secure in our relationship. I had full knowledge and full trust that it isn’t a “me problem.” It was just an opportunity to increase the love that [I] feel. All I could feel at the time was something in the ENM community called “compersion,” which is joy at seeing your partner happy with someone else.

Doug: Out of all of us, I think I’m the only one who was ever in a poly relationship before. Even if there was a lot of heartbreak, I did see that capacity in myself that I can definitely love [more than a single person]; that’s an unlimited thing, it’s not something that can be quantified.

[Polyamory] isn’t really for everyone, only some people can do it…I think it helped that we had friends that were ethically non-monogamous, too. From the get-go, we had people to talk to.

Perse: I was super curious about it. A factor probably is because my ex cheated on me. When Doug explained it to me and I was getting to know more [about] it, it’s okay. [I realized] I wouldn’t want to stop meeting—this is going to sound babaw (shallow)—hot people.

There are other more important parts about polyamory that I really like, one of which is transparency. You have to be truthful about everything. Because if you’re [not], then it’s not ethical.

Doug: Here’s how I see [transparency] and honesty, it’s definitely a must in relationships, but the fact that…we already set our own expectations for ourselves and for each other, it’s such a huge weight off my shoulders.

W: What are boundaries in your polyamorous relationship? Is there anything off limits?

Kevin: There are hypothetical situations that only come up until they come up…probably not encounters with people that the other [person’s] not aware of.

Mica: That’s one thing. It is a setup that does happen, but personally, I don’t feel like I can be okay with a “don’t ask, don’t tell” setup.

Kevin: So, full awareness with each other.

Mica: I can’t actually say that any poly friend of mine that’s been in that particular setup has survived with their other partner, ‘cause it gives you such an opening to push boundaries…that’s such a slippery slope.

Kevin: Maybe there are people that [that setup works] for; it’s not us or anyone we’ve met, so far. Definitely a boundary for us is if anything happens, it has to be known above board and no surprises…I think the biggest boundary is [don’t date anyone who] doesn’t respect their relationship.

Perse: There’s a lot of specifics; we literally have a chat [with] rules.

Doug: Off the top of my head, we do have a few rules. There are certain days that are off limits, ‘cause these days are really special for us. As much as possible, I’d want my attention to be on [Perse] on those days, and the same goes for [her].

Perse: Being in a polyamorous relationship [requires] constant evolution, constant discovery ‘cause you talk a lot about the relationship…We dive into the nitty-gritty of the relationship. With that communication comes evolution. There can be hypothetical situations, but there are also real situations you can’t preempt. With that, you have to change and adjust [the rules].

W: Let’s talk about the elephant in the room–do you ever get jealous?

Perse: Jealousy is a normal human emotion, it cannot die; you can’t just take that out of your brain.

Doug: The thing about jealousy is, it’s not just jealousy, eh. It’s a mixture of so many other emotions.

Perse: It might not just stem from trust ‘cause it’s not that, cause I trust [Doug]. It might stem from emotional trauma; mine definitely stems from that. But it’s a normal emotion that a lot of people shy away from. The thing about [jealousy] is you have to manage it with your partner….It’s not a “we problem,” it’s a “me problem.”

Doug: The hard stuff still happens, and we get through it just fine because we have such solid communication.

Perse: When we have arguments, it’s not you and me against each other; it’s us together against this situation.

W: Lastly, what does a healthy polyamorous relationship look like?

Doug: I would say there are basic [characteristics], like with any relationship. It has to have really solid communication—not just that, but also honesty ‘cause you can communicate but sometimes, honesty isn’t there. Finally, consent is, for me, the bedrock of everything. All those three things, for me, encompass trust.

There is more about polyamory, as surprising as it is, that resembles a monogamous relationship. There’s no doubt that this progressive kind of relationship is not for everyone, but for the couples who choose this type of lifestyle, as we learned, one simply just does not run out of love to give.