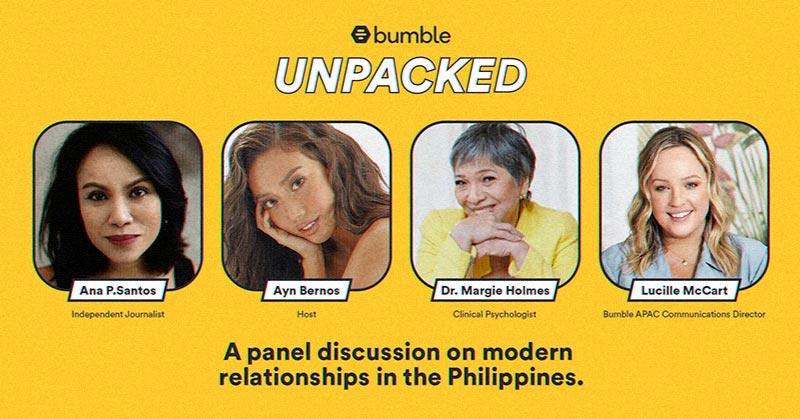 And so the story goes that Whitney Wolfe Herd, founder of Bumble, left her job at Tinder to create a female-first online dating app that advocates for a kinder, safer experience for people to connect. “For all the advances women had been making in workplaces and corridors of power, the gender dynamics of dating and romance still seemed so outdated. I thought, what if I could flip that on its head? What if women made the first move and sent the first message?” she writes.

In the Philippines, the online dating scene is flourishing, especially mid-pandemic when organic ways to meet people are scant. Bumble’s recent study reveals how almost half (49%) of Filipinos surveyed believe it’s possible to fall in love through dating apps. Traditional views on dating are slowly dwindling, and the expectation that as women, we “wait to be chosen,” is losing its appeal. As empowered females, we choose to take control by making the first move.

Bumble offers us control over how the conversation goes and lets us lead with consent (as opposed to another online dating horror story). It serves as an equal playing field for men and women to date, which in the end benefits everyone. 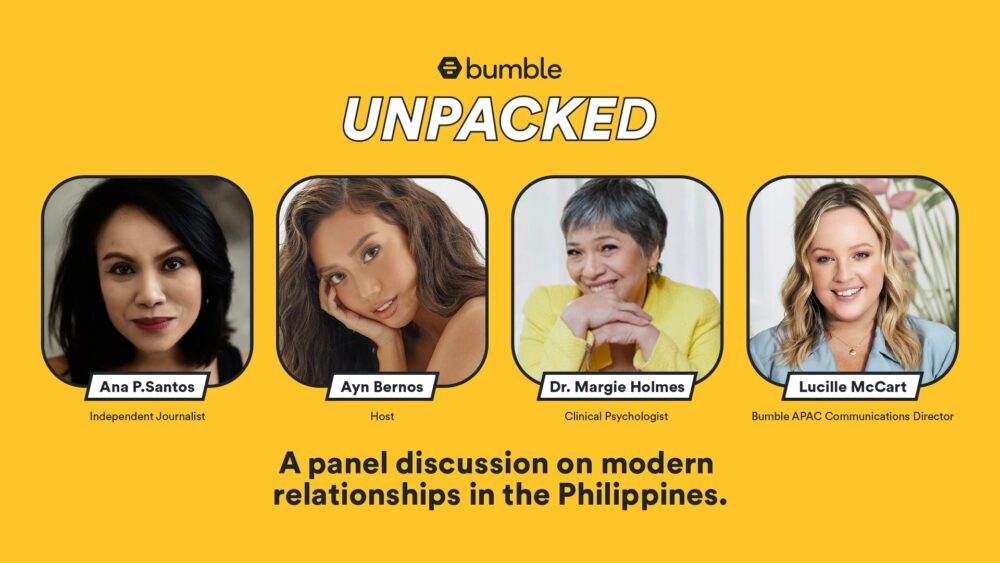 Need expert-backed tips to make online dating work for you? Read ahead.

Be the person you want to date

In a recent study conducted by Bumble, most Filipinos prioritize personality over any other aspects when looking for a partner. Personality (79%) is highlighted as the most important aspect when it comes to people looking to date or finding a potential partner, followed by emotional connection (47%) and level of financial ability (32%).

Ana P. Santos shares: “I always have this saying that, you know, you should be someone you want to date.” It rings true that more Filipinos are less interested in dating someone who isn’t future-oriented. Dr. Margie notes, “Maybe now we’re looking forward to changing that definition of a prince charming and how he should be the be-all, sweep me off my feet. Maybe now we’re looking for a teammate, an equal, ‘cause you know the really great words to hear from a partner? ‘I’ve got you.'” She adds, “I think it’s good that what you’re looking for is ability. You’re also looking towards the future…I think what happens with Bumble, which encourages women to be empowered, is men can also feel safe in a relationship because the woman has the capacity to say the same thing—’I’ve got you.'”

“The most important thing is your self-concept…If your self-concept is real, just hold on to it and believe it because this is what matters,” pinpoints Dr. Margie. Navigating through dating can lead to unprecedented challenges—whether it’s being ghosted, shedding gender stereotypes or even burnout. She adds, “You cannot avoid sometimes meeting up with people who don’t deserve you, people who have no sense of civility. But just remember it’s not about you, it’s about them.”

Lucille McCart notes the role Bumble plays in helping women advocate for themselves: “We really believe that if you can empower a woman to make the first move in dating, that can have a flow-on effect to other parts of her life. If she builds that confidence in her dating life and does something that she never would have been comfortable [doing] before she used Bumble, then that’s gonna make her more confident throughout the relationship—to ask for what she wants, to say how she feels. That can carry over into her career and other parts of her personal life, her family life and other different things. That’s really at the core of why we do it.”

Rejection is part of the game

Many times, the fear of rejection stops us from actually going out there and seeing what’s possible. Rejection, unfortunately, is part of dating, but it happens to also be a great teacher. Lucille reveals, “I think there’s a lot of fear of rejection as well, but I think that’s part of the experience of online dating. It’s actually way less scary than going up to someone in a bar and getting their number, because [with Bumble], you can just put your phone down and pretend you didn’t see that. That didn’t happen if you didn’t want it to! There’s way less on the line emotionally.”

She adds, “[Ghosting] is the unfortunate side of online dating…It’s really important to remember that it’s not about you. It’s a blessing that they’ve removed themselves from that situation because it’s allowing you to concentrate on people that will cultivate that relationship in a much healthier way.”

Anna believes that rejection doesn’t always have to lead to bitterness. There’s always an opportunity for people to simply communicate that a match just isn’t leading anywhere. She notes: “Let’s also remember that there’s a space where we can be kind to one another and polite. It can be as simple as sending a quick message to close a conversation.”

Be intentional about dating

Online dating can oftentimes lead to burnout when you’re not in the right headspace or aren’t doing it intentionally. Lucille recommends “scheduled swiping” as opposed to just endlessly swiping throughout the day. She shares, “[Online dating] is all about going through the motions. What I try and do is treat it like anything else in [my] life. Schedule time for it! Don’t do it when you’re in a bad headspace or if you’ve had a bad day at work or a fight with your family.” She adds, “I’m not going to swipe endlessly or just open the app and then close it a million times throughout the day. I’m going to dedicate time to it, to look for what I want and use things like filters if you have a specific thing you’re looking for.”

Focus on putting in the effort to people who do the same. She adds, “Be intentional on how you behave on the app and how you’re looking for people. We can get dating app burnout—that’s a real thing—if you’re doing it too much or too little…You’re also allowed to change your mind about what you want and what you’re looking for, and I think online dating apps like Bumble give you so much opportunity to do that.”

Redefine what “success” in dating means for you

Dating doesn’t always have to lead to a long-term relationship. There’s so much beauty in the journey regardless of the many pitfalls you encounter along the way; it may even be a way for you to learn about yourself.

Lucille shares it’s possible to just redefine what success means when it comes to dating. She closes, “What are you measuring success by? Because if you have had great dates that didn’t lead to a relationship, if you’ve had a great time or met some people who became good friends, you had success. You may not have found the one, you may not be married yet or have done those things, but I think redefining what you think of as ‘success’ through the app is an important part of [dating] as well. Just because you haven’t found someone you want to be in a serious relationship with doesn’t mean you haven’t had great experiences and added value to your life.“

The online dating realm can lead to plenty of possibilities, regardless of the risks. Just remember to be intentional about it and make room for respect and kindness. Now, are you ready to make the first move?