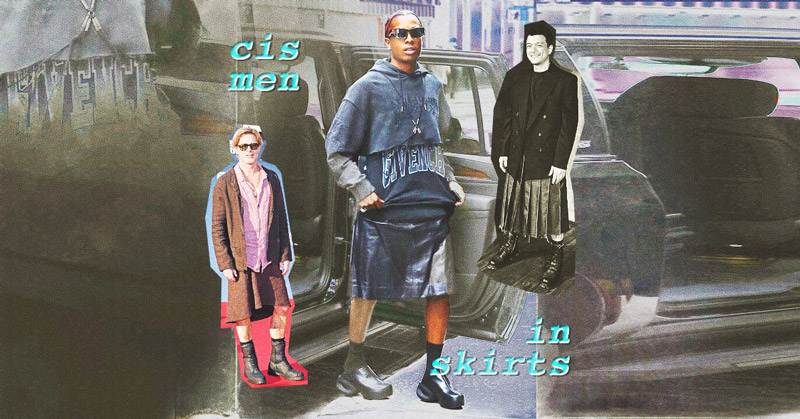 A$AP Rocky and Brad Pitt: A Winning Case for Cis Men in Skirts

This year of dopamine dressing has relaunched the idea of cis men in skirts, like Brad Pitt, and we stand by it

From David Bowie to Harry Styles, we know genderless clothing isn’t a new concept. For a long time, unisex clothing was only targeted amongst those who identified as a different gender. Perhaps that is why straight men are reluctant to experiment with fashion. They were conditioned to believe that a skirt is a free pass for bullies to degrade their masculinity. When in reality, any straight man that does not run away in fear from a piece of cloth is the definition of secured virility.

News flash! It’s no longer the 1700s, and we can wear whatever we want. But it was only last year when the fashion industry decided we should have unisex clothing for childrenswear. After decades of divided store aisles, the reversal of gendered fashion has just begun. We may not have had this for ourselves, but at least the next generation will not be pressured to dress a certain way.

With Brad Pitt and A$AP Rocky being the quintessential macho men, no one expected them to rock knee-length skirts so effortlessly. And the best part? They just felt like it. Period.

Now, any man who wishes to wear a skirt can say, “If Pitt and Rocky did it then why can’t I?”

RELATED: The Elusive Harry Styles Tours Us Around His Abode in “Harry’s House”

Brad Pitt feels the breeze at the Bullet Train premiere

Pitt has made headlines recently for his response to journalists asking about his outfit choice for his new film Bullet Train. When asked about the inspiration behind his look, he says, “I don’t know! We’re all going to die, so let’s mess it up.”

We can always count on Brad to give us the truth through dark humor, and he’s not wrong! With the environmental concerns going on, a man in a skirt is the least of our worries. Pitt’s alternative reason is that he enjoyed the breeze that a skirt provides.

This isn’t the first time Pitt has worn “women’s” clothing. We can all agree that his shoot with Rolling Stone magazine in 1999 is hard to forget. He was a man in a dress on another planet. It was hot, controversial and ahead of its time.

Brad’s Bullet Train co-star Bad Bunny recently wore a dress for his Jacquemus campaign, but this isn’t the first time he’s flexed in a dress. He’s worn skirts in music videos and showed up to the Met Gala in a Burberry maxi skirt with a beaded updo. We also can’t ignore the fact that he’s referencing Brad’s Rolling Stone shoot.

Not long after the film premiere, Jericho Rosales posted this picture looking handsome as ever in a blazer and a pleated skirt. It’s an outfit choice his wife Kim Jones usually wears.

Last month, he posted himself wearing a knitted sweater with Brad Pitt’s face on it. I guess we can assume he is also a fan. But let’s face it, who isn’t?!

RELATED: 5 Businesses Owned By Celebs That Will Inspire You To Get Yours Started

A$AP Rocky wasn’t lying when he said he was a trendsetter in his song Fashion Killa featuring Rihanna. Looking cool as ever, Rocky stepped out in head-to-toe Givenchy. It seems about right that Rihanna’s boyfriend would effortlessly pull off a leather skirt.

Now that the king and queen of music and fashion have a child together, it’s no question that they will orchestrate the best wardrobe.

Rocky has revealed that he plans to raise open-minded children who do not discriminate. At the end of the day, he just wants a cool kid with cool parents. But we all know that “cool parents” is already ticked off the list.

RELATED: All Our Favorite Celeb Looks from Fashion Week

From masculine celebrities to universal parenting through unisex kidswear, it seems we’re heading in the right direction. It might have taken some time to get here, but hey, better late than never.